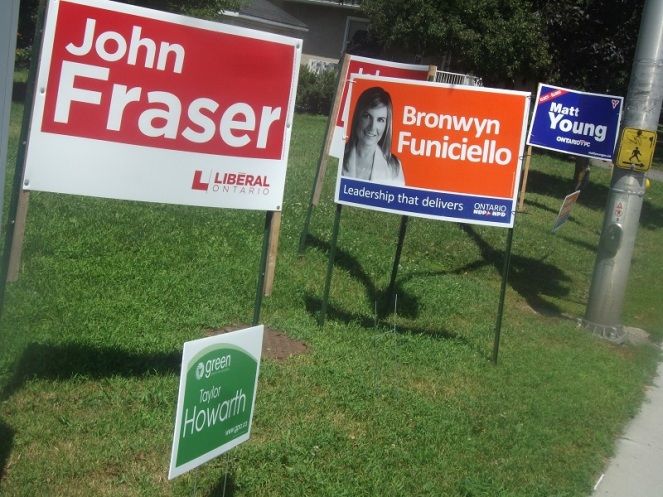 During every election cycle, lawn signs spring up like weeds all over our neighbourhoods. Particularly in municipal elections, where candidates receive little media attention, lawn signs are a major component of political visibility and a tool for building name recognition and mobilizing voters. Though one 2016 study found that lawn signs increase vote share by just 1.7 percentage points, a 2011 Vanderbilt University study found that election signs had a 10% percentage point impact in low-information races. Unfortunately, who can post a sign and support their preferred candidate is largely a function of property regulation and economic status.

Given that an annual household income of $200,663 is required to purchase a detached home in Toronto, residents below the poverty line and in the middle class will overwhelmingly live in medium and high-density rental units. Faced with this reality, what options exist for tenants to display a sign supporting their preferred candidate? Though they may be interested in having a sign installed on the private property around their apartment building, city bylaws state that tenants are not permitted to post an election sign on their building’s property or lawn without the consent of the apartment building owner – and there’s no guarantee that a building owner will fairly grant permission to all tenants requesting it. The bylaws permit renters to put signs up in a window or the exterior of a balcony, but such signs have limited visibility and are effectively useless compared to those on the ground level, which can be seen easily by pedestrians, cyclists and vehicles. The majority of renters simply aren’t able to visibly express support for their candidate of choice.

So who are the property owners? Those who can afford Toronto’s high prices, of course. Investors own apartment buildings, and families with high incomes or inheritances own homes – or can at least afford to rent single detached houses. As such, these groups are able to promote the candidate that reflects their best interests. Consequently, candidates running with platforms that appeal to the wealthy have higher visibility and name recognition, and thus are more likely to be elected. Conversely, candidates with platforms friendly to low income groups and the middle class will have comparatively low visibility, and will face an uphill battle  mobilizing individuals to vote for them. Ultimately this serves to create an uneven playing field, tilting the odds in favour of certain candidates from the outset.

The overexposure of candidates who advance business interests and the demands of the upper class may have severe consequences for low income and middle class residents in our communities. Once elected, those candidates have few incentives to create policies that benefit poor and middle class renters, since these groups are not a significant part of the candidate’s voter base. Since securing re-election depends on catering to the interests of the upper class, policies will be designed for the benefit of wealthy voters. Ultimately, the system helps the wealthy further entrench their monopoly on political influence.

This is a form of political disenfranchisement and injustice, particularly towards the poor and the young, who are more likely to be renters. Without meaningful representation on city council, inequality will only continue to worsen in our city.

As an advertising tool that’s available predominantly to those wealthy enough to rent or own a home, we might consider doing away with election signs altogether – it would certainly be better for the environment. However, signs are important tools for candidates to build name recognition, and there is no clear alternative that fulfils their function. Instead, perhaps city bylaws could be changed to force property owners to allow each tenant to install a sign on building property if they so choose. That being said, if our ultimate goal is to inform and empower potential voters in low-information municipal races, then the best solution is to build a better system to access election information and candidate platforms: one that is clear, easily accessible, user-friendly, and well-advertised.