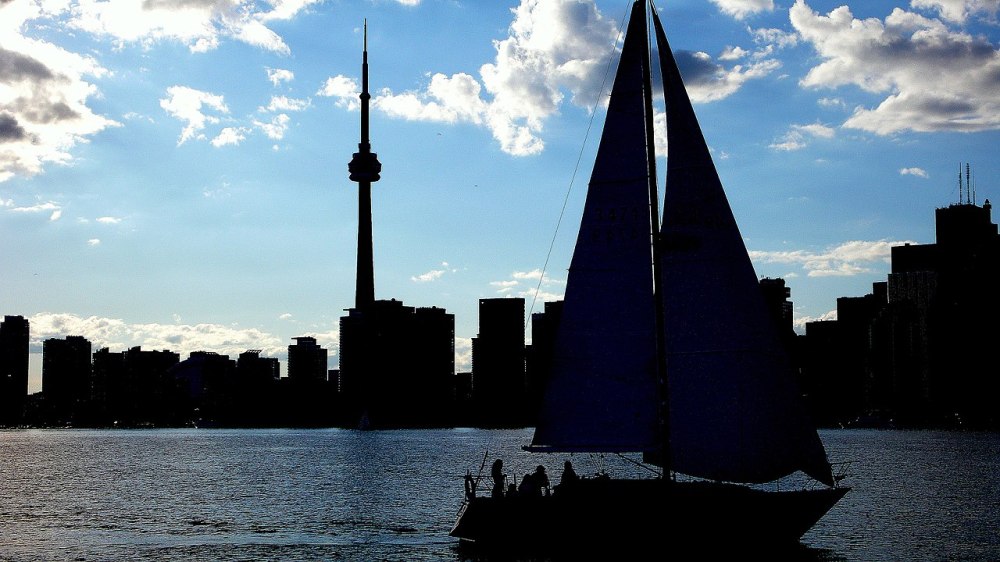 The Toronto Harbour area is contaminated. Though frequently used for various recreational activities, such as boating, swimming and fishing, since 1986 the federal government has designated it an Area of Concern (AOC) due to issues with water quality and environmental health. The source of these issues? Storm water overflows mixing with raw sewage, as well as spills and chemicals from sewage, septic, industrial and agricultural facilities. The contaminants serve as nutrients that lead to toxic algal blooms, loss of oxygen in the water, and the dissemination of fish populations, all to the detriment of the harbour’s overall water quality.

The problem is persistent: an October 2017 report by Lake Ontario Waterkeeper found that of 339 water samples from three primary locations (Bathurst Quay, Rees St. Slip and Marina 4), 43% did not meet standards for swimming.  Another report in November 2016 examined 166 water samples and found that two-thirds failed to meet provincial water quality standards.

In response to concerns regarding water quality in the harbour, the City of Toronto in 2003 released the Wet Weather Flow Master Plan (WWFMP), a 25-year plan to “improve water quality in Toronto’s watercourses, beaches and Lake Ontario waterfront.” The WWFMP outlines 13 objectives to improve Toronto’s ecosystem related to water quality and quantity, sewer infrastructure and natural areas and wildlife. Implementation plans have included a basement flooding protection subsidy program, road drainage improvements, public education and outreach programs and erosion protection works at private property priority sites. The WWFMP has been allotted $1billion, $624 million of which has already been spent as of late 2016.  Additionally, the city has four wastewater treatment facilities that collect and clean wastewater, returning the clean, clear water back to the environment.

Concerns from the reports released by Lake Ontario Waterkeeper suggest that the City should do more. One option is more monitoring – the City only regularly monitors the water quality of 11 beaches during the summer months and has not routinely checked the downtown harbour since 2009, leaving 97% of the waterfront unmonitored. But science offers us another solution: bioharvesting ribbed mussels.

Bioharvesting, or also known as nutrient bioextraction, is the practice of cultivating shellfish and seaweed, and using their biological properties to remove excessive nutrients like nitrogen and harmful contaminants from the water. Shellfish (like mussels) are “filter feeders,” and filter plankton and organic matter, assimilating the nutrients in their shell and tissue. Undigested material is excreted and falls to the seafloor, where it is further dispersed by currents or buried in sediment.

Bioharvesting has been proposed as a solution to water quality problems in the U.S. and Europe and has begun to be implemented in some jurisdictions, like Long Island Sound in New York (which has conducted pilot studies and economic modeling) and Chesapeake Bay, the largest estuary in the United States. Until now, it has primarily been used to treat water systems that harvest commercially valuable species for human consumption.

Ribbed mussels (Geukensia demissa) are native to the Atlantic coast of North America and found in Canada around the Southern Gulf of the St. Lawrence. They filter a large range of pollutants in their environment, including bacteria, microalgae and excessive nutrients from the water. They can be digested by humans, although they taste horrible and so are not sold commercially like the mussels eaten at seafood restaurants. Thus, the ribbed mussel poses no real health concern by entering the human food chain. Figure 1 demonstrates how ribbed mussel filtration functions. 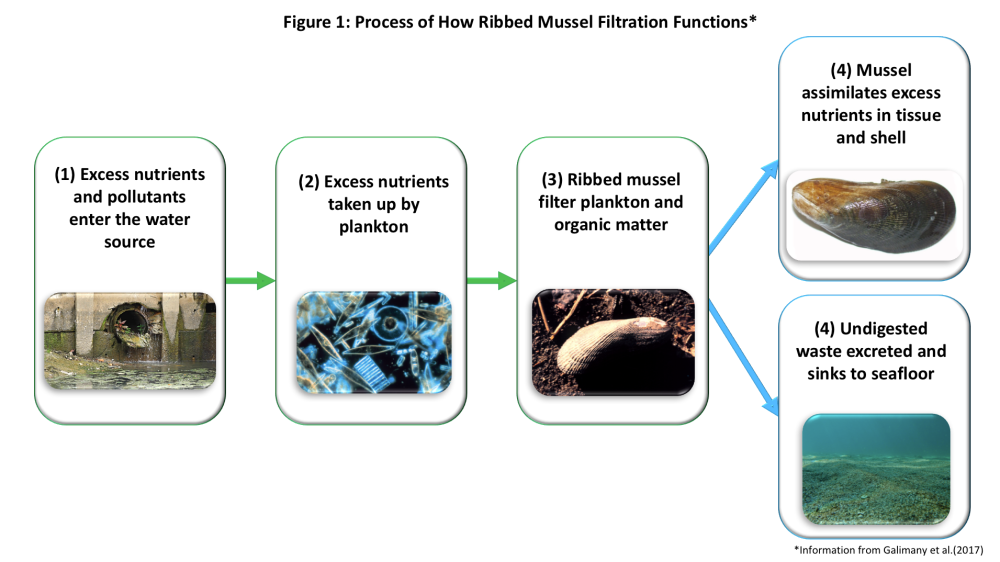 In a 2017 study, researchers placed a 6 m X 6 m raft filled with ribbed mussels in the Bronx River Estuary in New York from April 2012 to October 2012. As an industrial waterfront, the Bronx River Estuary has a history of industrial wastewater run-offs. The study monitored the mussels’ health and the water chemistry before and after the experiment.

Results from the filtration by the mussels were positive. The ribbed mussels were found to be healthy and resilient in the urban environment. The raft of mussels filtered on average 1.2 X 10^7 L of water daily, removing 160 kg of particles from the water, 12 kg of which was digested by the mussels. Multiple chemicals were filtered from the rivers, including aluminum, mercury, lead, and arsenic, as well as insecticides like DDT and chlordane.

What made the ribbed mussels ideal for the Bronx River Estuary was that the species is native to the region and is already present in the area’s ecosystem. However, the ribbed mussel is not native to Lake Ontario and could negatively impact the ecosystem by out-competing other suspension feeders or by altering the common habitat it shares with another species. For example, after being accidently introduced on the Pacific Coast in California, the ribbed mussel is said to have impacted the habitat of the endangered Californian clapper rail.  The now-predominant and threatening invasive species of Asian Carp was introduced to North America in the 1970’s with the goal of improving water quality in rivers. It now outcompetes other species in its habitat and poses a threat to Canada’s Great Lakes ecosystem. Although the ribbed mussel is currently not listed as a regulated invasive species in Ontario and could help clean up the polluted harbour, we must make sure we do not repeat such a mistake again and introduce a potential invasive species into the waterways.

Canadian urban waters may benefit from exploring bioharvesting as a way to mitigate excessive nutrients and to improve urban water quality. However, Toronto’s WWFMP makes no reference to researching it as a solution to the city’s trouble with the harbour. Whether it be through the efficient ribbed mussel or another filtration species that is native to the Lake Ontario, it is time that the City begin to consider bioharvesting as a potential path forward for the waterfront. Through preliminary research and study of available techniques, it may become clear that the harbour’s future is already in the water.

Ian T. D. Thomson is a 2018 MPP Candidate at the School of Public Policy & Governance.  Originally from Winnipeg, Ian holds both a Bachelor of Science Honours degree in Psychology and a Bachelor of Arts degree in Philosophy from the University of Manitoba. His policy interests include energy policy, natural resources policy, and fisheries policy.