A tweet by Prime Minister Trudeau went viral after he welcomed refugees to Canada in response to President Trump’s executive order restricting immigration from seven majority-Muslim countries. The following day, a Quebec City mosque was the target of a shooting that left six men dead and 19 wounded. The perception that Canada is a mosaic of diversity and tolerance is beginning to crumble as the nation enters a period of mourning and soul-searching. Meanwhile, critics have argued that the Federal Government should go beyond mere statements and take real action to address the plight of Muslim refugees in North America. In particular, the government can: lift the refugee cap, rescind the Safe Third Country Agreement, and adopt the Resolution on Islamophobia.

Refugee advocates and private sponsors argue that Canada should remove its cap on privately sponsored refugees. The temporary public policy was introduced in September 2015 and renewed in September 2016. It affects two types of sponsorship agreement:

1) Community Sponsors: organizations or associations located in the community where refugees are expected to settle

2) Groups of Five: gives five or more Canadians the ability to sponsor a refugee to come to Canada

When the cap was set in 2016, private sponsors were scrambling to submit their applications in time to meet the limit. The current cap of 1000 applicants has already been met, which means that any incomplete or late submissions will automatically be rejected for the 2017 cycle. Immigration, Refugees and Citizenship Canada has stated that the policy was put in place to address the backlog of applications. However, lifting the cap may be a reasonable demand in light of recent events in the United States of America.

As a signatory to the UN Refugee Convention of 1951, refugee advocates and human rights groups argue that Canada is obligated to re-evaluate its commitment to protect refugees given the current hostility emerging from south of the border. Canada signed the Safe Third Country Agreement (STCA), a bilateral agreement with the U.S., which came into effect in 2004. The agreement was initiated to better manage access to the refugee system in each country, but the STCA limits the rights of refugees protected under the Refugee Convention. The agreement allows the first of the two countries in which the asylum-seeker arrives to determine the refugee status of the claimant. However, given the differences in the refugee systems of the two countries, asylum seekers who are returned to the U.S. are likely to be returned to countries where they may face persecution. 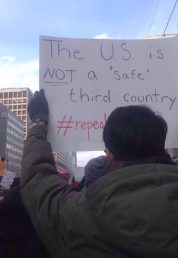 There are significant implications for refugees coming into Canada from the U.S., especially under the current circumstances. The STCA actively prevents refugees arriving from the U.S., with a few exceptions. The Canadian Council for Refugees argues that the U.S. is no longer safe for refugees after Trump’s controversial executive order. Most refugees seeking asylum fly to the U.S. instead of Canada because of easier access. Since flights are often routed through the U.S., it forces asylum seekers to place their claim there. Citizens of Syria, Iran, Iraq, Sudan, Somalia, Libya and Yemen are the target of discriminatory immigration policies that infringe upon their rights as refugees.

Over 200 law professors across Canada have signed an open letter for immediate suspension of the STCA citing its inconsistency with international law and perpetuation of xenophobia. Repealing the STCA would allow all asylum seekers currently in the U.S. to access Canadian refugee system without risking their lives crossing the border on foot in extreme weather conditions.

Citizens of Syria, Iran, Iraq, Sudan, Somalia, Libya and Yemen are the target of discriminatory immigration policies that infringe upon their rights as refugees.

The Federal Minister of Immigration, Refugees and Citizenship, Ahmed Hussen, clarifying the government’s position stated that the STCA “remains an important tool for Canada and the U.S. to work together on the orderly handling of refugee claims made in our countries”.

Adopt the Resolution on Islamophobia

The lack of federal action to address the rise of Islamophobia is the final critique of the federal government. Recently, Liberal MP Iqra Khali of Mississauga Erin Mills introduced Private Member’s Motion M-103. The resolution suggests that the government should:

a) recognize the need to reduce the current climate of fear and hate
b) condemn Islamophobia; and
c) request that the Standing Committee on Canadian Heritage undertake a study on how to address these issues.

When a House of Commons standing committee is tasked with studying a specific issue, it often makes recommendations on how best to address the topic. However, the government is not required to adopt any of the committee’s recommendations.

The resolution is scheduled for debate on February 21st at 5:30pm (ET). It represents a step toward addressing Islamophobia in Canada; however it also faces opposition. Notable threats to its adoption come from Conservative leadership hopeful MP Kellie Leitch who tweeted about her disagreement with M-103. Barbara Kay, a columnist for the National Post, has also been vocal about her opposition to the non-binding motion alleging that it could lead to the adoption of Shariah Law in Canada. However, Prime Minister Trudeau responded to questions about M-103 by stating that it aims to address the concerns of a community “particularly vulnerable these days to intolerance and discrimination.”

While the Prime Minister’s tweet was celebrated by many as a representation of Canadian values, for many others action will speak louder than words.

The above recommendations for federal action address the interrelated issues of the impending refugee crisis alongside the rise of Islamophobia –neither of which can be addressed individually. The federal government can do more to support Muslim refugees, and these policy recommendations show just that. While the Prime Minister’s tweet was celebrated by many as a representation of Canadian values, for many others action will speak louder than words.

Terhas Ghebretecle is a Master of Public Policy Candidate at the School of Public Policy and Governance. She holds a Bachelor of Public Affairs and Policy Management from Carleton University. She has worked in the Canadian public sector as well as for organizations in South America and East Africa. Her interests include international development, trade and immigration policy.

Talha Sadiq is a Master of Public Policy candidate at the University of Toronto’s School of Public Policy and Governance. He holds an Honours BA in International Development and Environmental Studies from the University of Toronto and most recently worked at the United Nations World Food Programme. His policy interests include health, environment, and international development.