Ontario should also take the opportunity to remove fake health “sciences” from its list of regulated health professions. Homeopathy and naturopathy do not follow evidence-based practice and lack scientific credibility. Government licensing and regulation, initiated in 2007 with the Naturopathy Act and Homeopathy Act, gives so-called practitioners of homeopathy and naturopathy legitimacy when none is deserved. Regulation and licensing regimes for naturopaths also exist in British Columbia and Alberta, and are pending in Saskatchewan and Manitoba.

The Canadian Association of Naturopathic Doctors claims naturopathy “stimulates the natural healing process of the body” and treats “the root cause of disease.” Naturopathic treatment can range from nutritional and lifestyle counselling to homeopathy, herbal medicine, and manipulating “energy” in the body. Several naturopathic practitioner websites investigated for this article claimed to treat a broad range of conditions including infertility, Crohn’s disease, multiple sclerosis, insomnia, autism, ADHD, hypertension, diabetes, and cancer. One naturopath, licensed by the government of Ontario, claims to practice “quantum energetic medicine,” using “current research” in “quantum physics” to measure quantum energy in the human body and identify “bioenergetic connections to the health tissues.” These claims are not based on science.

Homeopathy is no better. Members of the Canadian Society of Homeopaths have written that homeopathy works by exposing patients suffering from a set of symptoms to extremely diluted concentrations of other agents that cause those symptoms. The Society uses the example of diluted, shaken red onions to cure someone suffering from allergies because onions cause burning, watery eyes.

“Nothing in homeopathy makes any sense based on science”

Part of the problem is that homeopathic preparations are so diluted that they are essentially water. A “6X” preparation is not diluted 1 part red onion in 5 parts water, but is in reality 1 part onion in 1,000,000 parts water, or 1 gram of onion per 1 metric tonne of water. An “8X” preparation would be 1 gram of onion per 100 metric tonnes of water. Absurdly, an 8X preparation is said to be better than a 6X preparation, contrary to everything known in science regarding dose-response mechanisms. There is probably more urine in pool water than onion in a homeopathic remedy.

“Nothing in homeopathy makes any sense based on science,” Dr. Matthew Steinbrook, an assistant editor for the Canadian Medical Association Journal said when the regulatory regimes were put in place in 2007.

While proponents of the regulatory regime argue that it protects consumers from false information, the regime in fact legitimizes professions whose claims are not based in science.  Additionally, the naturopathic and homeopathic field’s refusal to adhere to medical and scientific consensus undermines the authority of regulatory colleges to regulate deviant naturopaths and homeopaths.

Health Canada currently requires a lower standard of evidence from “natural health products” than it does for non-prescription drugs before approving a claim to treat or diagnose a disease or condition. Health Canada admits it has been accepting non-scientific evidence for natural health products, allowing their manufacturers to make claims that are supported by philosophy or tradition, but not by science.

However, Health Canada recently held consultations on proposals to require all cosmetics, natural health products, and non-prescriptions drugs to meet the same levels of scientific evidence before being granted approval to make claims regarding treatment or diagnosis of a disease or condition.

If new Health Canada regulations are approved, Ontario would be allowing licensed naturopaths and homeopaths to use naturopathic or homeopathic products to treat diseases which would not have been approved by Health Canada for such use. This raises obvious public safety concerns.

There have been several recent stories in the news of cases of children suffering or dying because their parents refused to give them medical treatment and gave them so-called traditional or alternative treatment instead. 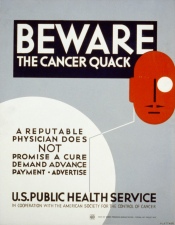 Meanwhile, two sets of parents were charged or convicted in Alberta last year of negligence following the deaths of their children after refusing medical treatment and treating them with alternative medicine.  Tamara Lovett is alleged to have treated her child’s streptococcus infection with homeopathic herbal remedies rather than seeking medical attention.  David and Collet Stephan were convicted with failing to provide the necessities of life after their child died from meningitis; they treated him with naturopathic smoothies and herbs rather than seeking medical attention.

It’s hard to imagine a government providing licences and regulation for a kind of plumber or electrician that fixes problems by harnessing the flow of quantum energy through a home. It makes no sense to hold those treating patients to a lesser standard.

Respecting patient autonomy means allowing people to make choices regarding their health using whatever information they would like. However, respecting these private choices does not mean all treatment options are effective, and scarce public resources should not be spent legitimizing naturopathy and homeopathy and treating them as valid complements to evidence-based medicine.

Marvin is a member of the Master of Public Policy Class of 2018 at the University of Toronto. He previously completed his master’s and doctoral degree in the cell biology of reproduction and fertility at Queen’s University, where he helped many Canadians start new families. His policy interests include science and research policy, industry-government relations, and health policy.  As a politically-minded scientist, he would like to advance the use of the scientific method to improve evidence-based decision making.