My last pipeline explainer left us on a policy cliff-hanger. Pipelines are crucial to Canada’s economy and energy infrastructure. As the primary mode of transportation for resources, they connect our exports to the United States. The history of pipelines in Canada dates back over 150 years, with some of the first pipeline innovations in the world happening here!

Yet, we have stopped short of calling pipelines ‘a Canadian Heritage moment.’ The safety and environmental impact of these conduits remain a contentious matter. This piece examines policies that are in place to address these concerns, concentrating on the role of the National Energy Board (NEB). By understanding current pipeline regulations, we are provided greater contextual factors to view the controversies and current developments of these Canadian conduits.

The regulations of the National Energy Board

Located in Calgary, the National Energy Board (NEB) is the federal regulatory agency responsible for overseeing 73,000 kms of international and interprovincial pipelines. Any company seeking to build a cross-border pipeline must obtain approval from the NEB before a project breaks ground.

Much of the regulatory framework for pipeline assessment is set out in the National Energy Board Act, legislation that was ratified in 1959. The application and assessment process requires companies to have clear measures for constructing, operating, and abandoning pipelines in a “manner that is safe for the public and the environment.” For example, onshore pipelines require corporations to include emergency management, public awareness, safety management and environmental protection policies in their pipeline project. The NEB also regulates the pipeline in relation to the regulations for oil and gas pipeline systems set out by the Canadian Standards Association and conducts environmental assessments in accordance with the Canadian Environmental Assessment Act.

Any company seeking to build a cross-border pipeline must obtain approval from the NEB [National Energy Board] before a project breaks ground.

Approval by the NEB doesn’t stop at the review stage. All 98 pipelines under their jurisdiction are subject to audits to ensure compliance with rules and regulations. The NEB has a number of enforcement tools for dealing with corporations who fail these evaluations, including stop-work orders and issuing “administrative monetary penalties” (AMPs) to individuals and corporations for violations. AMPs for corporations can be up to $100,000 per infraction each day.

Additionally, for any new pipeline project longer than 40 km, the NEB typically holds a public hearing to hear concerns from invested communities. For these major pipeline projects, the NEB must submit a report to the Government of Canada, which makes the final decision on the project. This process recently determined the fate of Kinder Morgan’s Trans Mountain and Enbridge’s Line 3 pipeline projects.

News from the NEB

In January 2016, the federal government announced interim rules for the approval of major projects that are in alignment with the government’s aim for new environmental assessment processes. The rules included continuing the practice of conducting project reviews, deciding approval based on science and Indigenous peoples’ traditional knowledge, and considering the public and the effect on communities and Indigenous peoples. The new principles also included performing mandatory assessments of the direct and upstream greenhouse gas (GHG) emissions that would be linked to these major projects.

With the Government of Canada citing the outdated NEB structure and a need to modernize pipeline regulation, the NEB Modernization Expert Panel will review the NEB’s current structure, role, and mandate, suggesting changes that will make the board a “modern, efficient and effective energy regulator.”

In June 2016, the Pipeline Safety Act (the Act) came into effect, enacting and reinforcing “the ‘polluter pays’ principle.” The liability of companies operating pipelines has increased: a company faces unlimited liability for any unintended release of resource from a pipeline if it is found to be at fault. Additionally, companies that operate pipelines transporting over 250,000 barrels of oil per day have a limited liability “without proof of fault or negligence” set at no less than one billion dollars. The Act also requires pipeline companies to maintain the finances for their applied limited liability and remain responsible for their abandoned pipelines.

Along with the interim principles and the ratification of the Pipeline Safety Act, the current federal government announced the creation of the NEB Modernization Expert Panel this past November. With the Government of Canada citing the outdated NEB structure and a need to modernize pipeline regulation, this committee will review the NEB’s current structure, role, and mandate, suggesting changes that will make the board a “modern, efficient and effective energy regulator.” The panel will present its report to Minister of Natural Resources Jim Carr by May 15, 2017.

Other changes to the NEB are trickling out on an ongoing basis. A press release from January 11, 2017 announced that the NEB will now require corporations to include additional emergency response details in their pipeline project application. This decision was made based on the agency’s public consultation.

But the NEB also has run into political controversy. In September 2016, all three members of the public hearing panel reviewing TransCanada Corp.’s Energy East and Eastern Mainline pipeline projects stepped down amid protests. 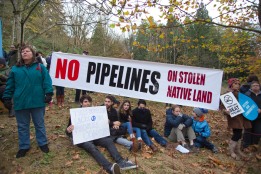 But the NEB also has run into political controversy. In September 2016, all three members of the public hearing panel reviewing TransCanada Corp.’s Energy East and Eastern Mainline pipeline projects stepped down amid protests. With two of the panelists having met in private with Jean Charest, a former premier of Quebec and current lobbyist for TransCanada Corp, the panel’s impartiality was no longer credible and the review of the project was suspended. On January 9, 2017, a new Energy East Hearing Panel was announced to review the pipeline projects. Pipeline protests and lawsuits continue to regularly materialize: Alberta Metís groups have begun blocking access to where TransCanada Corp’s NEB-approved Kettle River Lateral Loop natural gas pipeline would begin construction. Additionally, the Assembly of Manitoba Chiefs filed an application for judicial review of the Enbridge Line 3 replacement project with the goal of halting its development.

Canada’s pipeline policies remain an area of continual development in both policy and regulation. Pipeline policy is an evolving process as Canada moves towards stronger environmental policies: amending the Canadian Environmental Assessment Act and adequately addressing the necessary stakeholders with pipeline projects remain essential parts of the mandate for Canadian ministries.  With a potentially altered mandate for the NEB and the continued socio-environmental activism occurring against pipeline ventures, 2017 may help define the future role that pipelines play in Canada.