In Etobicoke, not far from the Pearson Airport, a fairly non-descript government building sits on a fairly non-descript stretch of highway. Built in 2013, the building has a glass-walled lobby and modest brick walls—it almost looks like an airport. Across the street is a Chevrolet dealership. There’s a carwash and a Jiffy Lube down the road.  Tucked in amidst this normalcy, however, this plain brick building at 385 Rexdale Avenue houses something a little more sinister—the Toronto Immigration Holding Centre. 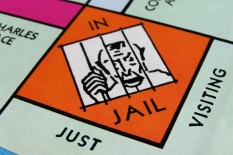 At any time, the Canadian Border Services Agency (CBSA) estimates that there are, on average, about 450 to 500 people held in immigrant detention centres across the country. People detained under the Immigration and Refugee Protection Act are not held because they are criminals; they may be refugee claimants or victims of human trafficking. The CBSA can detain people if they cannot be identified, are deemed a flight risk, are classified as inadmissible to the country, or are considered a danger to the public. In some cases, people held in immigrant detention centres are awaiting deportation. According to statistics reported in the Guardian, 6,768 people were detained from April 2014 to March 2015. Of that number, 3,325 were deported while the rest were released. There are three immigrant detention facilities across the country in Vancouver, Toronto, and Laval. However, detainees are sometimes also held in provincial jails when they are considered high-risk or when they are in areas not served by an immigrant holding centre. They can even be sent to provincial jails when they may require longer-term detention or medical attention that can’t be provided at one of the holding centres.

In recent years, public debate about immigrant detention and calls for reform of the system have been mounting, especially following the deaths of three people in detention in the first six months of 2016. According to the End Immigrant Detention Network, 15 people have died in the custody of the CBSA since 2000. There have been several documented hunger strikes by people held in detention centres in recent months, with the latest occurring at the Central Detention Centre in Lindsay, Ontario this October and November.

Eager to set itself apart from the Harper Conservatives on immigration policy, particularly with respect to humanitarian concerns, the Liberal government appears willing to act. In May, the federal government announced that it would review the policy of immigrant detention; in August, Public Safety Minister Ralph Goodale announced $138 million in funding to improve the system of immigrant detention.

This funding makes for good headlines, but it’s hardly enough. Canada needs wholesale reform of detention policies, and it needs to act now.

Canada’s system of immigrant detention fails to follow several guidelines set out by the UNHCR, the UN Refugee Agency. We’re one of the only developed countries with no limit on the number of days people can be held in immigrant detention, which essentially means a policy of indefinite detention. In the US, there is a 90-day limit, with the possibility for a 90-day extension. Law-makers in the UK voted in March to limit detention to 28 days, with court-mandated exceptions. In Canada, while the average length of detention is only around 22 days, people can be held for years.

When immigrant holding centres are overcrowded or when detainees need medical attention, people are transferred to provincial prisons, where they’re mixed with general prison populations and treated like criminals, even though they have not been charged with any crimes.

And they’re often not held in medium-security detention centres, either. The Global Detention Project notes that Canada is one of the few industrialized countries to hold immigrant detainees in prisons, a trend that is increasing. When immigrant holding centres are overcrowded or when detainees need medical attention, people are transferred to provincial prisons, where they’re mixed with general prison populations and treated like criminals, even though they have not been charged with any crimes.

Children are also held in immigrant detention facilities; some are held on their own formal detention orders, while others are de facto detainees along with their parents. The International Human Rights Program (IHRP), at the University of Toronto Faculty of Law, recently published a report detailing this practice and the consequences this can have on young children. The IHRP cites statistics from access-to-information requests that show an average of 242 children were detained annually from 2010 to 2014. Voices of detainees included in the report paint a devastating picture of the impact of detention.

“This is no life for a child,” said one mother who had been detained with her four-year-old son for six months. “He’s suffering and he’s not doing the things he should be doing: just being free on the grass, kicking a ball, whatever. Just not staying here.”

Here’s the real failure of the federal government’s “action” on this file: of the $138 million announced, only $5 million–3.6 percent–is going towards alternatives to detention. The vast majority, $122 million, is slotted for infrastructure enhancements, replacing detention facilities in Quebec and British Columbia.

Canadians need to stand up for immigrant detainees and demand a system that respects the human rights of all.

Simply building more detention centres will not fix the system. Instead, substantial funding is needed for alternatives to immigrant detention, which already exist. The International Human Rights Program report identifies several options to release people into the community instead of detaining them, such as reporting obligations, guarantees from local refugee-serving organizations, and third-party risk management programs. These are particularly needed for cases where people are held for being a “flight risk” (the reason most children are detained). According to the IHRP report, community-based alternatives to detention have a compliance rate of 95-100%. These are the kinds of initiatives that need government funding – finding ways to keep people out of detention when they are not serving a criminal sentence.

If the Liberal government truly wants do things differently than the Conservatives on humanitarian concerns about immigrant detention, they need to do more than pay lip service to these problems. Public outrage has a role to play here, too. Canadians need to stand up for immigrant detainees and demand a system that respects the human rights of all.

**Want to get involved? Dec. 10 is International Human Rights Day, and to mark it, the End Detention Network is organizing a rally at the Toronto Immigration Holding Centre.

Sasha is a public policy graduate student at the University of Toronto. She grew up in sunny Kelowna, BC, and received a bachelor’s degree in political science and professional writing from the University of Victoria. While at UVic, she began volunteering in refugee resettlement, which led her to develop a keen interest in issues of diversity, inclusion, and social justice generally. Most recently, she has worked for a community foundation in Victoria, and, when not in front of a computer, she enjoys meandering through cool neighbourhoods, singing and playing guitar (not well!), and exploring the great outdoors.