Although the Morning Briefing is only a few weeks old, we felt that it would be appropriate to break with tradition today. This morning, we’ve set aside our light, comedic style to address the results of the US presidential election.

For many among us working in or studying public policy, the surprise victory of Donald Trump and Republican retention of the Senate was immediately followed by a stream of questions from family and friends: How did this happen? Why were the polls so wrong? Who will Trump select for his Cabinet? Who will he nominate for the vacancy on the Supreme Court? What is the future of the Democratic Party?

Most of us do not know where to begin in answering these questions, but we’ve set aside this Brief to help you sift through the media’s response to what many are calling the largest electoral upset in American history. You may wish to spend an hour or two this weekend reflecting on the analyses offered below, and making sense of what Donald Trump’s election means—for the United States, Canada, and the world.

With a confirmed count of 279 electoral votes to Hillary Clinton’s 218 (some states have not yet been finalized) Donald Trump will become the 45th President of the United States. Trump shocked pollsters by winning almost all the crucial swing states (Florida, Ohio, and North Carolina), as well as a number behind the so-called “Blue Wall,” such as Wisconsin, Michigan, and Pennsylvania, states that had been held by the Democrats since 1992 or earlier. Republican victories in key Senate races such as Indiana, Ohio, and Arizona allowed them to retain a majority there as well, guaranteeing at least two years of one-party rule across the American executive and legislative branches.

Another suggested answer to why: Populism taking hold in America. While the populist movement has developed over the last century, it has recently surged — not just in the US, but around the world. “Populism” is a difficult concept to define, but this Foreign Affairs article does a good job of tracing different types of populism: left and right, and past and present. Trump’s brand of populism blames elites in business and government for undermining the common people’s economic interests and political liberties, but its definition of “the people” is narrow and restrictive. It is difficult to tell how classical conservatism in the US will be affected by the victory of populist sentiment in this election.

Why did the polls get it so wrong?

It’s one day after the US election and many of you may still be wondering why all the pollsters were so wrong? The answer to this question can at least partly be attributed to changes in pollsters’ abilities to collect random samples. Caller ID, the Harvard Business Review argues, has effectively allowed Americans to screen themselves, thus distorting the figures that are collected. Exacerbating the sampling issue is the reality that polling cannot accurately predict who will actually vote on Election Day, and whether those who will vote are being reached and included in poll data.

Who will Donald Trump nominate to fill the current Supreme Court vacancy?

The sudden passing of Justice Antonin Scalia in February turned the question of how to fill the Supreme Court vacancy into a central electoral issue. In this brief video for the Washington Post, Robert Barnes addresses potential nominees and the process going forward as Trump prepares to fill the seat.

Who will be tapped for Cabinet positions?

As the new President-elect, Trump must now select the members of his new Cabinet. Many have made well-informed guesses on who will fill these roles based on Trump’s victory speech and other alliances he has made throughout the Republican and Presidential campaigns. BBC news offers us a list of possible contenders for executive branch appointments in Trump’s administration.

For years, the National Review has been a leading publication covering Republican politics and American conservative thought. This election, they have been tepid in their response to Trump’s rise and the subsequent fracture within the GOP. Writing for the National Review Online, Yuval Levin offers a contrasting voice to many of the articles in this week’s Brief on the conservative movement’s hopes for Trump’s first term.

The future of the Democratic Party

Greeted warmly by a room full of supporters and staff, Hillary Clinton formally conceded the election to Donald Trump in a speech late yesterday morning in New York City. Her words struck notes of optimism, apology, and gratitude, she said of Trump that “we owe him an open mind” and expressed hope that he will govern with decency. The full speech can be found here.

Meanwhile, Democrats have already turned to the question of who ought to lead their beleaguered party moving forward. The New York Times has begun a debate in The Opinion Pages, which includes analysis on the role that millennials, criminal justice reform, and political donations will play as the party moves forward.

On Friday, January 20, 2017 Donald Trump will be formally inaugurated as the 45th President of the United States. He will then have to begin governing a country to which he has promised such unorthodox policies as a southern border wall, a temporary ban on Muslims entering the United States, and an isolationist “America-first” foreign policy. The New Yorker’s Evan Osnos has mapped out what the Trump’s first term in the Oval Office may look like here. 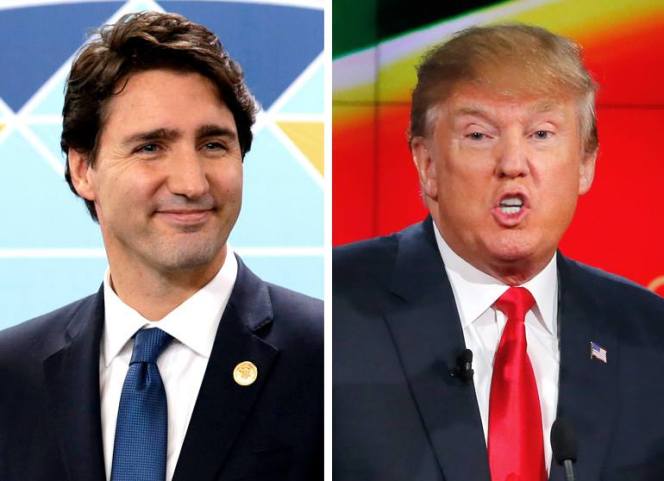 The most controversial response to Trump’s victory has come from Conservative leadership candidate Kellie Leitch, who began Wednesday morning with a fundraising email to her supporters that described Trump’s victory as “an exciting message” and “one that we need in Canada as well.”

For a look at how Trump and Trudeau may get along once the dust settles, we turn to Justin Ling’s piece for Vice Media on where the two leaders stand on defence, the environment, trade, and governing style.

Finally, Stephen Marche presents a controversial perspective, describing Canada as “the last country on earth to believe in multiculturalism” in his Walrus article, “Canada in the Age of Donald Trump.”

That’s all for today! Look out for the next edition of the Morning Briefing on Monday, November 14, where we will return to our normal format with the usual Canadian content.