An engaged crowd of policy wonks and academics gathered on the evening of October 17th at the Munk School of Global Affairs to listen to Toronto’s City Manager Peter Wallace. Hosted each year by the Institute for Municipal Finance & Governance (IMFG), the 5th Annual City Manager’s Address was entitled “What We Do Is What We Fund,” and it focused on the realities of Toronto’s financial situation.

Do we have the right fiscal toolkit?

In his second presentation at this annual event, Peter Wallace projected greater confidence in Toronto’s fiscal situation than in his presentation last year. Frank and honest, Wallace demonstrated not only his expert knowledge, but also his passion for the role. The presentation was moderated by Shirley Hoy, a former Toronto City Manager all too familiar with the complexities of balancing a budget at the municipal level. Acknowledging that all Canadian municipalities face similar challenges, Hoy kicked off the presentation with the question: “Do we have the right fiscal toolkit?” 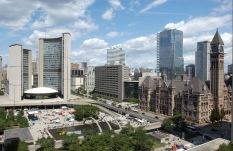 While the beginning of the presentation displayed positivity (did you know that KPMG ranked Toronto as the fourth most globally competitive city?), the discussion quickly turned to the major challenges Toronto faces. Although perhaps reassured by the knowledge that our City Manager is dealing with the situation head on, the talk ultimately left the crowd feeling pessimistic about Toronto’s $29 billion in unfunded capital.

Unsurprisingly, the options presented were similar to those frequently discussed at events hosted on fiscal policy: austerity and revenue. Both of which have major issues associated with them.

First, Wallace expressed that while Toronto does everything it can to be efficient and save costs, this just isn’t enough. After six years of implementing austerity measures, it is becoming increasingly difficult for City Council to find savings opportunities. Second, he asked: “What kind of city do we want?” Outsourcing all of Toronto’s services may not be the best policy option for the City, he said, noting Toronto’s “poor reputation at managing contracts,” and how a race to the bottom isn’t always the best policy for services that rely on quality, like shelters.

Revenue options were not presented favourably either, and followed the usual recipe of property taxes, specialty taxes, and user fees.

In my opinion, this highlights one of the biggest challenges Toronto faces: its lack of power to change its fiscal toolkit.

For example, Wallace pointed out that while in theory Toronto is able to implement a specialty alcohol tax, convincing the LCBO to collect that tax on our behalf would be another issue altogether.

Embracing the title of his presentation, Wallace was realistic, removing rose-coloured glasses to ask the tough questions: “Are these revenue tools actually reliable?”

There were really only two revenue tools that could definitively help solve Toronto’s deficit: increased funding from the provincial government (which of course is not favoured by Ontario), and increased property taxes (which are not politically favoured or viable for City Council). The underlying tension between the political and the public service was a common theme throughout Wallace’s presentation–although in his former role as Ontario Secretary of Cabinet, this is something that he has gained experience managing over the years.

At the end of the presentation Wallace fielded tough questions from both the audience and Hoy, such as “how do we focus the Mayor and City Council on the short-term and long-term?” and “how do we fix the implementation gap and deliver well?”

Wallace explained that a popular mayor is instrumental in bridging short- and long-term visions, perhaps implying that popular mayors are more likely to be re-elected and therefore be dedicated to seeing long-term fiscal policies through.

Wallace also highlighted Toronto’s lack of expertise in cost-estimation and project management, emphasizing the need for more investment in management and administrative capacity, including the use of IT systems. Perhaps the greatest sign of his frustration came when he said: “I shouldn’t have to be signing time cards and attendance sheets!”

Without the help of the province or greater access to revenue tools, it seems as though Toronto will either be forced to keep growing the hole of debt or to reduce the quality of its services: a lose-lose situation.

Unfortunately, it looks like Toronto doesn’t have the right toolkit to melt its financial iceberg alone. Without the help of the province or greater access to revenue tools, it seems as though Toronto will either be forced to keep growing the hole of debt or to reduce the quality of its services: a lose-lose situation. We can only hope that policymakers, public servants, and governments at all levels can work together towards a viable solution – only then will the 6th Annual City Manager’s Address be a good news story.

Lauren Birch is a 2017 Master of Public Policy candidate at the School of Public Policy and Governance. Interested in urban, municipal, and infrastructure policy, you can usually find her exploring the streets of Toronto (or planning her next trip to a foreign city for “research purposes”).