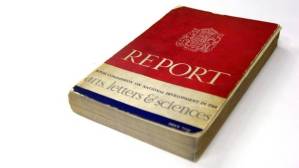 This year’s Walter Gordon Symposium is co-hosted by Massey College and the School of Public Policy and Governance, and explores the oft-overlooked subject of public policy in the arts. In the week leading up to the March 26-27 event, the PPGR will be featuring writing on the subject of the arts, cultural policy, and the ‘soft’ power of civilizations.

Canada’s international reputation has been seriously affected by past and present rights violations that run contrary to the United Nations Declaration on the Rights of Indigenous Peoples. Beyond the poor health, under-employment, lack of educational infrastructure, and poverty that plague many Canadian Aboriginal communities, Indigenous voices are often drowned out in popular media and journalism throughout the country.

The official website of the Canadian Broadcasting Corporation (CBC) appears to be the missing link to quality Indigenous news media. At the top of the CBC website is a direct link to the Aboriginal News Section, which boasts a wealth of written, video, and radio coverage of poignant issues. The CBC has even established an Aboriginal-focussed Twitter Account with 10,000 followers that serves as a social forum for debate and commentary on Aboriginal news. The CBC is also involved in supporting Aboriginal fine arts by creating an Indigenous music library available online and through Radio-Canada. Aside from its ability to connect First Nations, Metis, and Inuit communities to each other, the CBC receives national recognition as one of the greatest cultural institutions in Canadian history that is at the helm of producing and distributing local content.

Canadian Indigenous identity is extremely heterogeneous. Not only is it shaped by tribal and kinship traditions, but is also inclusive of Aboriginals in urban, rural, on-reserve and off-reserve locales. Moreover, Canadian law has its own conception of Indigenous identity, using the Indian Act to create distinctions between Status and non-Status Indians, which in itself is a socializing tool within Aboriginal communities and social structures. As a hallmark of Canadian media, the CBC must take on the task of unifying and presenting these diverse Indigenous voices to its listeners, viewers, and readers.

The consensus among commentators and critics is that the programming and coverage offered by the CBC has a good degree of breadth and depth. There is coverage of a wide spectrum of stories that also attempt to remain culturally appropriate and considerate. CBC news crews have been at the centre of such events as the Idle No More demonstrations, the Attawapiskat Housing crisis, and the investigations into Missing and Murdered Aboriginal Women.

Covering such a range of issues is without its challenges, however. The CBC itself has been openly critical of the nature of Aboriginal media coverage in Canada, which research has demonstrated to be focused on Indigenous strife, rather than triumph. Scholars have also questioned the narratives used in the 17-part Historical Moments televised miniseries, which often tell stories through a colonial perspective rather than of focusing intently on empowering Aboriginal notions of Canada’s historical experience. Even in consideration of these multidimensional challenges, without the momentum and national legitimacy of the CBC, it is difficult to fathom another institution that could step into its place and provide an equally visible, accessible and trusted platform for amplifying the Indigenous voice.

Looking ahead, the challenge for the CBC will be to remain cognizant of the rules of unbiased journalism, while constantly publishing the most topical stories from across the country. The nature of Indigenous news will continue to change and intensify as Aboriginal communities continue to grow due to the increasing youth population. There is no media portrayal that is not concerned with avoiding any form of overt and covert bias; in the case of Indigenous media, some Aboriginal experts have become both critics and teachers by illuminating the common injustices in Canadian media and prescribing remedies to solve these problems. The CBC has successfully trained their reporting staff through personal and professional insight into Aboriginal news coverage. CBC Reporter Duncan McCue, for example, created a guide for fair reporting in Indigenous communities.

There are also multiple blogs commenting on mainstream Aboriginal stereotypes  which have seen an influx of comments, where readers air their grievances, ask questions, and comment upon blog content. These publicly accessible forums may provide a key to the future preservation of CBC Aboriginal programming. The socioeconomic barriers that prevent large numbers of Indigenous-Canadians from having the training and organizational capacity to formally integrate into the CBC bureaucracy may be better served in this more informal setting, where public involvement is simpler. As the CBC is threatened with further funding cuts, relying on comment sections, public-access radio programs, and any other medium sparking grassroots political conversation may be ultimately more effective at encouraging widespread sociopolitical engagement.

What will hopefully persist, though, is the ability of the CBC to be the common denominator that bridges the gap between the 1.5 Aboriginal Peoples across Canada, from First Nations groups in British Columbia to the Inuit populations in Nunavut. Speaking on behalf of diverse Aboriginal peoples is not an easy task; thankfully, the CBC has the national reach that underlies the strong partnership between the news mogul and Canada’s Indigenous populations.

Deanna Veltri is currently a Master’s student at the School of Public Policy and Governance. She also holds a Bachelor degree in Political Science from McGill University. Her policy interests include gender policy and health policy.